Are you ready for a delicious Crock Pot meal that keeps your house cool and smells AMAZING??? You've hit the moist and flavorful chicken jackpot today!  This recipe (from a cookbook my super cool friend gave me for Christmas!) also uses a "secret" ingredient a lot of people grow in their gardens (and if you don't, you can pick up a frozen bag super cheap, like $2 cheap, at the grocery store!).  Okra!  Now, now.  Don't turn up your noses.  While I grew up eating pickled okra and fried okra, I know a lot of you have either #1, not tried it because it looks yucky or #2, tried it but thinks it's slimy.  Well, I will assure you, this isn't yucky or slimy!  No one will ever know this has healthy okra in it if you don't tell them.  No one at my dinner table knows.  Trust me on this one! This chicken is delish served with rice or in a tortilla shell.  Enjoy :) 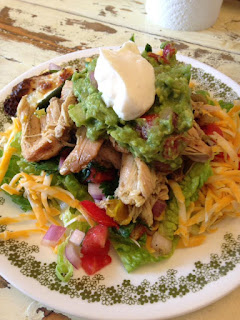 Place chicken in a crock pot.  Chop 1/2 of the cilantro leaves and sprinkle on chicken along with diced onion and sliced peppers.

Make sauce:  Blend remaining 1/2 bunch of cilantro leaves with okra, lime juice, salt, pepper and garlic until well blended.  I used a magic bullet.  Pour sauce over chicken and veggies in the crock pot.  Cook on high 6-8 hours.  I removed the meat and took off the skin and bones and put it back in the juice before serving.  If you cook breasts, you can just shred them in the juices. 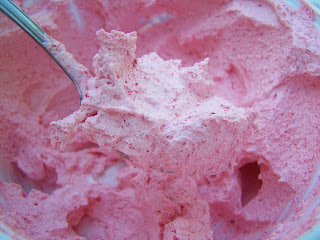 Click here to check this amazing recipe out on my new, updated website!! If you're looking for an amazingly easy, delicious, healthy and versatile dessert, you've hit the jack pot! The possibilities are endless with this yummy stuff. Who knew a tub of cool whip and box of jello or pudding could be so great?!? I personally liked this better with the instant pudding (I tried cheesecake pudding), but it's also very good with the jello (that's cherry flavored jello pictured). If you're wanting a thick, creamy, mousse like dessert you should try it with instant pudding, but if your in the mood for a fruity, foamy dessert the jello's for you... and if you can't decide , make both! Carrie's Cooking and Recipes came through with this one. Thanks Carrie :) FAT FREE COOL WHIP DESSERT 1 (3.9 ounce) package of sugar-free Jello gelatin or pudding (flavor of choice) 1 (8 ounce) tub of the lowest fat free cool whip (or sugar free if you can't have sugar 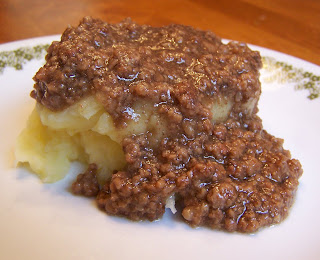 Click HERE to see this recipe at my new website! Today I'm breaking the official lunch lady code. I'm divulging a "secret" school recipe. OK, it's probably not secret, but I feel like I'm doing something bad... and I like it!! A while back (while I was still a substitute custodian at the elementary school) I got an email from a friend asking if I could get my hands on the schools hamburger gravy recipe. My eyes lit up. I always loved the schools gravy, but could never figure out how to make it. This was my chance to snag the recipe. I had been working at the school for several months and couldn't believe I hadn't thought of the idea myself. I marched in the kitchen with purpose the day I asked the school cook Rose for the recipe and she happily spilled the beans. When it was gravy day at school I was so excited because it had been years since I eaten the real deal. I seriously considered licking the plate. It was SO good!!! Rose was so impressed by my 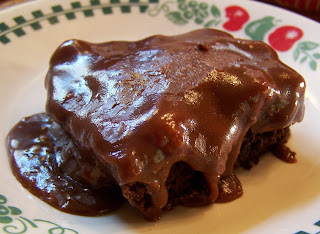 Today's the day! I'm the SITS featured blogger... and a wee bit excited :) I hope my first time visitors find a lot of great new recipes to try. I feel my mission's accomplished if I inspire one person to cook. There's no bigger compliment than my viewers emailing me and telling me their families enjoy or have saved money using the recipes I've posted! For those of you new today I would like to share a few links to some of my favorite ( and top commented) posts: Marshmallow Roses - I felt quite clever coming up with this idea! They're adorable, simple to make and would be great party favors. Fat-Free Cheesecake Stuffed Strawberries - Need I say more? Poor Momma's Pizza - This is a great meal idea for a mom on the cheap (like me!). My kids and husband both enjoyed these. I don't know about you, but I don't think any celebration's complete without chocolate. Being featured blogger's something to celebrate, so here's a great chocolate tr